Sesame Street is an American educational children's television series that combines live action, sketch comedy, animation and puppetry. It is produced by Sesame Workshop. The series premiered on November 10, 1969, To positive reviews, some controversy, and high viewership, becoming the most successful children's TV program in the history of television; it has aired on the U.S.'s national public television provider PBS since its debut, with its first run on HBO on January 16, 2016, then its sister streaming service HBO Max in 2020. 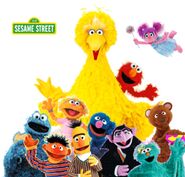