Dash is the main host of PBS Kids. He is also one of the hosts in the PBS Kids block. He is Dot, Dee and Del's older brother. Dash is an intelligent, friendly, energetic, pleasant, cool-looking boy who loves to dance, swim and play soccer with his friends. He was 7 years old in 1999 and 9 years old in 2008 up until his removal in the 2013 rebrand. After the rebrand, he is 14 years old.

Mason Therrel was the voice of Dash, since the change in his voice, he was replaced by various child actors, such as Regan Mizrahi and Jake Beale. He even appears on the logo in 1999, alongside Dot. He also appears on the VHS and DVD logo in that same year, basically the same as the television broadcast, but with "kidsvideo" at the bottom. In 2012, child actor Bob Schwartzman explained that he was the new voice of Dash.

Dash was retired from the block in late 2013 and two younger siblings appeared in his place. Luckily, in 2017, Dash makes a triumphant return in a "Word of the Week" segment called "Community". He also appears with a younger version of Dot, on the most latest merchandise. 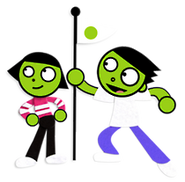 Dash and Dot are capturing a flag

Dash and Dot when all the sheep were surrounding them, had the same 1999 noise

In 2013, Dash was retired. He was replaced by Dot's younger brother, Del and her sister Dee

Dash reunites with his family 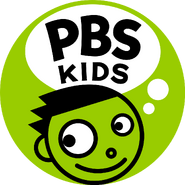 Dash on the beach

Retrieved from "https://pbskids.fandom.com/wiki/Dash?oldid=58829"
Community content is available under CC-BY-SA unless otherwise noted.